Fracking for Shale Gas: Is it safe?


Posted by Anthony Fazzio at 9:59 AM No comments: 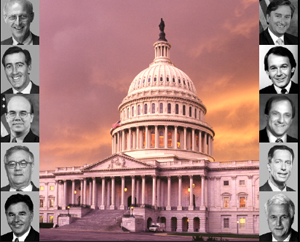 Posted by Blake Corley at 1:18 AM No comments:

The British Petroleum oil catastrophe has been called the "greatest oil spill in United States history." BP's oil spill has and could result in enormous problems for all of us here in Louisiana. Potentially for many years to come.
Recently, Congressman Charlie Melancon expressed his deep sympathy for the people of Louisiana during a statement to several of his House colleagues. Even after vigorously attempting to fight back his tears, Mr. Melancon couldn't refrain from expressing how important Louisiana is to him and our impact on the entire nation.
The people affected by this catastrophe are the men and women whom Charlie grew up with, did business with, represents in Washington DC, and whom play a vital part in the overall economy of our nation. Every shrimper, fisherman, and oil rig worker, along with our unique marshes and all of coastal Louisiana have become threatened by this oil spill. Charlie sees this and is fighting to preserve our livelihoods, culture, and way of life. He knows, more than anyone else in Washington, the enormity of the BP oil spill.
Louisiana, Charlie is fighting for us in Washington because, to him, this is a fight devoted solely to the best interest of the people of Louisiana. Nonetheless, many Washington politicians will partake in "politics as usual" during a time of crisis. Thankfully, the people of Louisiana have Charlie Melancon in Washington standing up for all of us. During a time like this, we need a friend, a leader who we all can trust. We can, like always, count on Charlie Melancon.
Charlie Melancon immensely loves and is devoted to our state and every person who lives here. To say the least, he is a person of good character.
Thank You Congressman Melancon!
Posted by Blake Corley at 12:11 AM 1 comment:

Opera Unite
Posted by John at 12:40 AM No comments:

David Vitter: Why are you forgetting about Louisiana? 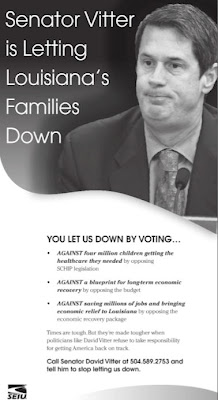 Posted by Blake Corley at 12:16 PM No comments:

David Vitter: Hoping Louisiana Families Continue To Struggle... Just So He Can Say I TOLD YOU SO!

On his radio show last week, Rush Limbaugh, the "unofficial leader" of the Republican Party, declared that it was a "dirty little secret" that "every Republican in this country wants Obama to fail." "None of them have the guts to say so," added Limbaugh

“I hope [Obama] fails in advancing leftist policy that I strongly disagree with,” Vitter said. “I think what [Limbaugh] was saying was largely what I am saying.”

Really, Who in their right mind would say that they hope that the President's recovery efforts fail?  Whenever here in America people are struggling, companies are struggling, and the American people are tired of this suffering.  In Washington DC Louisiana Senator David Vitter says the he hopes Obama's policies fail.  Senator, I am not a liberal or a conservative at the end of the day whenever I turn on my television and continue to see jobs lost.  I am not into putting a label before the American people.  I do not care if I call myself a Democrat, at the end of the day after watching all of this suffering, I would put aside all of the labels: liberal, conservative, Republican, Democrat, or any other term that is supposed to represent an assumed way of thinking.  I would say that if someone from an opposite party affiliation offered new solutions (whenever old ones have failed) and had a vision for these struggling families, I would not care which party affiliation they selected on their voter registration, all I would care about is the betterment of Louisiana and America.  Senator, you represent me, my family, Louisiana, and you hold such an honorable position in our Government.  Please represent me the way a forty-eight-year-old elected Senator should and not in a close-minded, robotic, Republican machine fashion.  Show Louisiana that whenever you go to Washington DC you are fighting for us and are not just a Republican Puppet.

David Vitter shows once again when he goes to Washington DC he is just not quite the Vitter he claimed to be!

According to Raw Story, when Vitter learned he didn't make the flight, he tried to open an alarmed security door.

After setting off the security alarm, the Louisiana senator proceeded to dress down an airline employee who told him entering the restricted area was forbidden. He invoked his standing as a senator, delivering a "do-you-know-who-I-am" tirade, the paper said.

Vitter wouldn't calm down, even after the employee threatened to call security.

"Vitter, according to the witness, remained defiant, yelling that the employee could call the police if he wanted to and their supervisors, who, presumably, might be more impressed with his Senator's pin," the paper's Heard on the Hill column noted. "But after talking a huffy big game, Vitter apparently thought better of pushing the confrontation any further. When the gate attendant left to find a security guard, Vitter turned tail and simply fled the scene."

Posted by Blake Corley at 10:48 PM No comments: 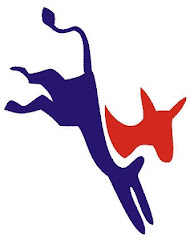